One puppy, Two puppies or more? 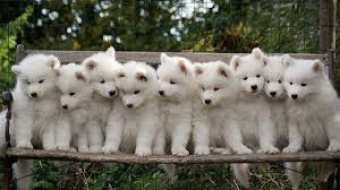 How does more than one puppy affect my approach to training?

So you love dogs and you are thinking about getting more than one puppy at the same time.

Your reasoning is that they will take care of each other, play together and will actually make things easier. Unfortunately, it is much more complicated than that.
Each puppy will need its own separate care. This means separate puppy house training (their systems might not be on the same schedule), separate puppy socializing, separate bonding with you, separate exercise and again even two puppies from the same litter could require very different exercise routines, separate puppy crate training and finally separate training.

What did I miss? Oh, for the first year of their lives your puppies need to remain in separate parts of the house with the exception of a 30 min or so play time every day. If your puppies spend most of their time together during the day they are at great risk of developing littermate syndrome. This is where two young puppies form a strong bond to each other and as a result the puppies have difficulty relating to humans or other dogs. Littermate syndrome is not a for sure, but there is a very high risk of this if you get two puppies of young age and let them grow up together. The effort to keep two puppies in different areas of the home, different puppy crate training, different puppy house training schedules etc.... is enormous as is the risk of the littermate syndrome if you allow them to cohabitate together.

Another issue to consider is what if one of the puppies develops a behaviour issue? Now you don’t only have a new puppy with all the new puppy things that come with it to worry about, you have two new puppies and on top of that you have a behaviour issue that will need separate time, training and money dedicated to it. Even a person who is well off financially normally doesn’t have time for two puppies, one with a behaviour issue. So what gives?

What normally ends up happening is the owner brands one of the puppies as a problem puppy and justifies re-homing one puppy over the other simply because the puppy has behavioural issues the owner doesn’t have the time or energy to deal with. It wasn’t the puppy’s issue at all, both were perfectly fine puppies when they were picked up at 8 weeks old from the breeder. In fact, one of the puppies has successfully become house trained and has learned basic obedience commands.

On a note of the cost, take the vet fees, puppy boarding fees, puppy toys, the puppy's crates, training (I suppose our online training would eliminate the need for two separate training classes), damage to your home from destructive puppy chewing etc... and then just multiply all of that x2. The estimate of the cost of a dog over their lifetimes is around $10,000 with a slightly larger proportion of that at the beginning with all the start up gear you need and the increased vet visits due to your puppies having worms and the necessity for vaccinations.

So, there is the cost, the separate living quarters, separate training times, separate socialization times, risk of littermate syndrome and risk of a behavioural issue which needs specific attention which could mean your puppy becoming aggressive not just puppy biting, nipping or chewing shoes.

What is the solution? Wait a year or two. Your puppies will love you and the money you save on anti anxiety medication for yourself is worth it alone (kidding). Make your new puppy coming home a happy time. Set up your puppy training so that you enjoy it and make it memorable. A new puppy coming home is a great time both for your new puppy and for you. Savour the moment and take lots of pictures. Be prepared by accessing our Members section and understanding how to prepare for a puppy and how to train it beginning with the appointment at the breeder to pick it up. After you have been through the first year you will have a more accurate idea in your head of what needs to be done for your puppy in it's most important year. If you choose at that point, then it's the time to bring another new puppy home and introduce it to your older dog properly (also discussed in our Members area). If you choose against, you have just saved yourself the possibility of huge headaches, loss of time and money and what is the most important, you've saved the stress placed on your puppy and the risk of it developing improperly and possibly becoming tossed around from shelter to shelter by owners who are unable to correct their problems.

Ultimately it is your risk to take. Hopefully this discussion has helped broaden your knowledge on the topic.