How Do I Train Two Puppies at The Same Time? 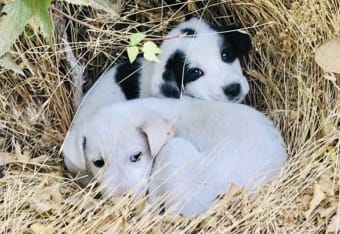 Training two puppies at the same time is nearly impossible for one person to do, and training them at once (even if not simultaneously) usually isn’t recommended because of the risk of them developing littermate syndrome. If you’re still interested in raising two puppies, here’s some advice.

If you’ve considered getting multiple dogs in the past then you may have thought about adopting two or more puppies at once. After all, wouldn’t it be great if your dogs could grow up among their siblings? If you don’t know much about dogs then you might apply human logic to raising a dog, but you might be making a huge mistake in the process.

While it sounds like a great idea, the reality is that raising multiple puppies in the same household can cause more problems than you think. Training more than a single puppy usually isn’t recommended. No matter how experienced you are or how confident you might be, it’s still suggested that you should only ever train a single puppy at once. In fact, it’s usually recommended that you separate puppies when they’re around 8 to 10 weeks old and place them in different homes.

This is due to a behavioral problem known as littermate syndrome. We’ll be explaining what it means in this article and also giving you some advice on how you can train two puppies if you’re adamant about it.

What is littermate syndrome?

Littermate syndrome describes a non-scientific anecdotal term that refers to a number of different behavioral issues that occur when dogs are raised in the same household as other siblings (known as littermates).

What are the effects of littermate syndrome?

The main issue with littermate syndrome is that the puppies begin to rely on each other a lot more than they should. In most cases, one of the puppies ends up being a little more shy and laid-back. While this can seem rather cute at first, it actually holds back their potential and makes them a lot more timid and scared to step outside of their comfort zone. The other puppy, while more bold and confident, can also be rather anxious when they’re separate from their sibling.

Due to this dependence on each other, your puppies will start displaying serious symptoms of high anxiety whenever they’re apart. Even if you take one of them to the vet or they’re in different rooms, they’ll start to act differently and will actively search for their sibling. In addition, your puppies relying on each other means that they’re a lot less likely to bond with their human family. Once the puppies mature, they might even start fighting each other.

Can we avoid littermate syndrome?

The best way to avoid your puppy developing littermate syndrome is to ensure that they are not raised or trained with another puppy in the same household. Separating them means they’ll have to learn to fend for themselves, but it also means they’re more likely to interact with and trust their human family.

Unfortunately, training two puppies together is not the best case scenario for most people. Some might already have two puppies, so it’s a little difficult for them to hand one of them back to the breeder. In some cases, it might be difficult to separate both your puppies, meaning there’s a high chance that they’ll start to depend on each other.

Thankfully, there are a couple of ways that you can teach your puppies to be more independent, even if they have to live in the same household. While this isn’t impossible, it’s certainly quite difficult and requires a lot of attention and discipline from you as well.

Training two puppies at once while avoiding littermate syndrome

It’s not impossible to avoid littermate syndrome if both your puppies live in the same household, but it’s going to be quite difficult as it requires a lot of attention and workarounds. Here are some tips to help you out:

Make sure each puppy has their own crate to sleep in and even their own puppy toys. Don’t get used to putting them in the same crate. Let them sleep separately in their own area. You can start by putting their crate or bed close to each other, but gradually move them apart so they get more comfortable being apart.

Take each puppy for a walk at different times. It can be time-consuming to take your puppies out several times a day. You should regularly be taking your puppies out, just make sure it’s not at the same time.

Focus on their bond with you and not themselves. It’s a good idea to get the puppies used to seeing you and not just each other. For instance, if you’re away for most of the day, you’ll want to spend some quality time with both of your puppies separately. If you don’t do this enough, your puppies will start to rely on each other which can lead to littermate syndrome.

Puppies should be allowed to express themselves and develop their own personality. If you’re training two or more puppies, then it’s important to separate them as best as possible. This helps ensure that your puppies won’t develop a dependency on each other and gives them the best chance of a health and independent lifestyle.