Why Does My Dog Eat Grass? 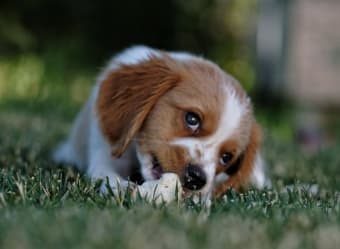 When you see your dog eating grass, you might wonder what the heck is going on. What could motivate an animal that eats meat and grains to take a swipe at your lawn?


For years, organizations such as the American Kennel Club have puzzled over this behavior. But now we finally have some answers. What’s more, it turns out that grass-eating could actually be beneficial. Who would have thought?

There are currently two prominent theories researchers have proposed to explain why dogs eat grass: nutrient deficiency theory and the evolutionary scavenging theory.


The nutrient deficiency theory says that dogs eat grass to make up for missing nutrients in their diet. Just like us, canines need a full complement of vitamins, minerals, and fiber to thrive. If they can’t get these nutrients in their regular food, they’ll start seeking them out from sources in their environment.


Thus, this theory sees grass-eating as an instinct. Dogs’ nutrient-sensing apparatus tell them that the green stuff that comprises your lawn contains the compounds they need to survive, and so they start chewing it up.


New research from the University of California-Davis, however, casts doubt on this idea. In a study at the institution’s Center for Companion Animal Health, researchers followed the nutritional status of 1,500 dogs that had eaten grass ten times or more in the previous year. They found that relatively few dogs were ill before consuming grass and that their fiber status did not affect their propensity to munch grass.


The evolutionary scavenging theory explains the observed facts slightly better. This model sees grass-eating as more of an opportunistic way to clear parasites. Canines, like other mammals, need to take advantage of all sources of food in their ecosystem. And so when dogs find grass, they take a nibble, as it could help them fight back against intestinal diseases and keep them healthy over the long-run.


Researchers from the University of California-Davis believe that this is the most likely explanation. Grass eating, they say, appears to be a trait modern dogs have inherited from their wild ancestors. They point out that wolves and cougars often eat grass to reduce their parasitic load in their intestines. So, regular grass-eating could be a method of enhancing the immune system and keeping the animal healthy.

Aside from these major theories, several other hypotheses are floating around the internet that purport to explain the phenomenon. For instance, some experts think that dogs just like the taste of grass. Others suggest they do it out of boredom. Another theory says that dogs like the texture of grass in their mouths.


In truth, there could be multiple reasons why your dog eats grass. And only further research will indicate the valid reasons for the behavior.

Is It Safe To Allow Dogs To Eat Grass?

The question of whether it is safe to allow dogs to eat grass is a complicated one.

It seems that dogs can tolerate grass quite well - better than people. But there are still good reasons to discourage them from eating it.

Grass, for instance, can contain a lot of parasites that aren’t present in regular dog food. So, paradoxically, allowing dogs to eat it could actually seed their gastrointestinal tract with the very parasites eating grass is supposed to prevent. This is more likely if they are eating the grass in the same area they are pooping in.

You should also prevent your dog from eating any grass that has recently been treated with pesticides or herbicides. If you suspect that your canine has eaten treated grass, contact your vet immediately.

In some cases, a dog eating grass suggests that the animal is already sick. It could be that the animal is trying to medicate itself, and it sees the eating of grass as a way to do this. Grass is okay when that’s the only thing that you have available. But modern veterinarians have much more powerful and effective treatments at their disposal for most pup problems.

What Should You Do If You See Your Dog Eating Grass?

Generally, owners should only take action if grass-eating becomes excessive. If your dog munches on your lawn less than once per month and is otherwise happy, you probably don’t need to worry. However, if they start doing it more than that, it could be a reason for concern.

Some experts believe that dogs eat grass for psychological reasons - most commonly boredom and distress. So if you notice that your pup has suddenly taken to munching on the lawn, think carefully about how their environment could be affecting their wellbeing.

If boredom is the issue, you may be able to reduce grass-eating by taking them for walks more often or increasing the amount of exercise that they get. If that doesn’t work, you could try introducing toys to keep their minds active.

If the issue is separation anxiety (which can occur when you leave them to go to work in the morning), you may be able to reduce this by leaving an old t-shirt or blanket with your scent on it with them.

Occasionally, grass-eating could be an obsessive behavior that emerges from more deep-seated psychological issues or because your dog has parasites. In both of these cases, taking the animal to the vet is your best option. They will give you advice on what to do next and provide you with a course of treatment.

There are many stories behind eating grass. Some owners find that when they increase the amount of fiber in their dogs' diet or take them for walks more often, the behavior stops. Others only find a remedy when they take their animal to the vet.

In general, there is no need to worry about grass-eating if your dog is happy otherwise. It’s an evolutionarily inherited behavior and to be expected. If your dog has parasites, it may even help keep them healthy by reducing the parasitic load.